When typing out my itinerary for the day, I make a note of how bad this part of the drive would suck.  I was right. Hardly 24 hours into the trip, I have already driven over eight hundred miles and have another two hundred left before getting to the park. It’s been a long road but I knew what I was getting myself into and I also know what’s awaiting me when I arrive, so I press on for the final stretch.
Making good time, I arrive at Glacier around 5:00pm, so I decide to take advantage of the daylight that I have left and head into the park via the Many Glacier entrance. It’s an area that I didn’t do a whole lot of research on, as everything was centered around my backpack route in the central part of Glacier, so I’m pumped to make it in time for a quick hike. I roll up to the entrance and with no one behind me, I strike up a conversation with a stocky female in her early twenties sporting her trusty NPS ranger hat. “Good afternoon! What’s your favorite three to five mile hike at sunset?” I ask.  “Most people go on the Grinnell Glacier trail but me and a lot of the rangers like the Redrock Falls trail. It’s an easy five-miler with rad views, lots of wildlife and way less crowded.” “Perfect, I’m on my way!
Wasting no time, I get to the trailhead, load up my backpack and start walking. Not even a mile into the hike, I notice a few people taking a side path down to the water, so I decide to check it out. Standing in the massive glacier carved lake, are three beautiful female moose (or is it meice?) They’re spread out in the water, about fifty feet from each other, but thankfully there’s one close enough for me to capture. I stay for a few minutes but I know the sunlight will be quickly fading, so I get back to the trail and continue on toward Redrock Falls. 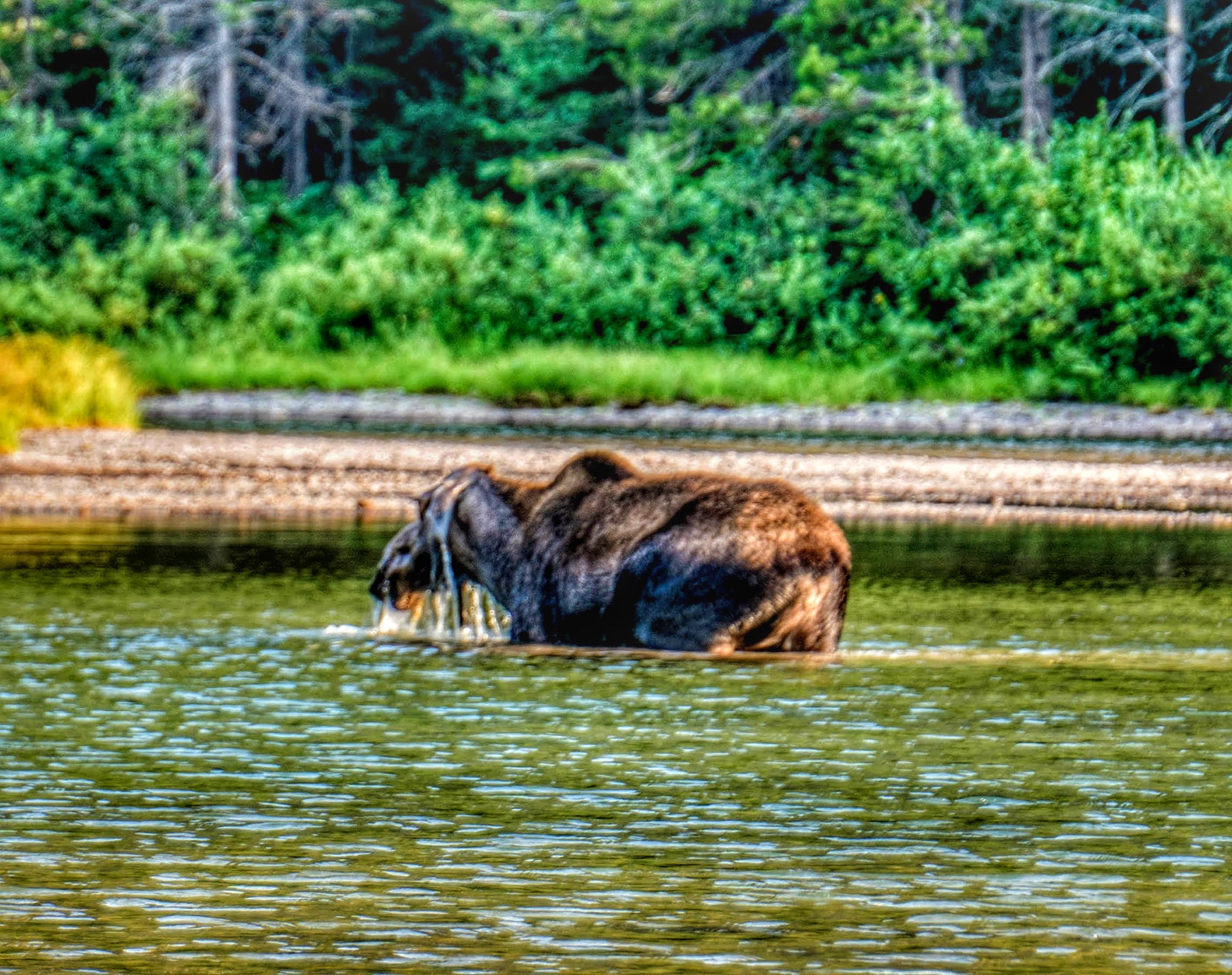 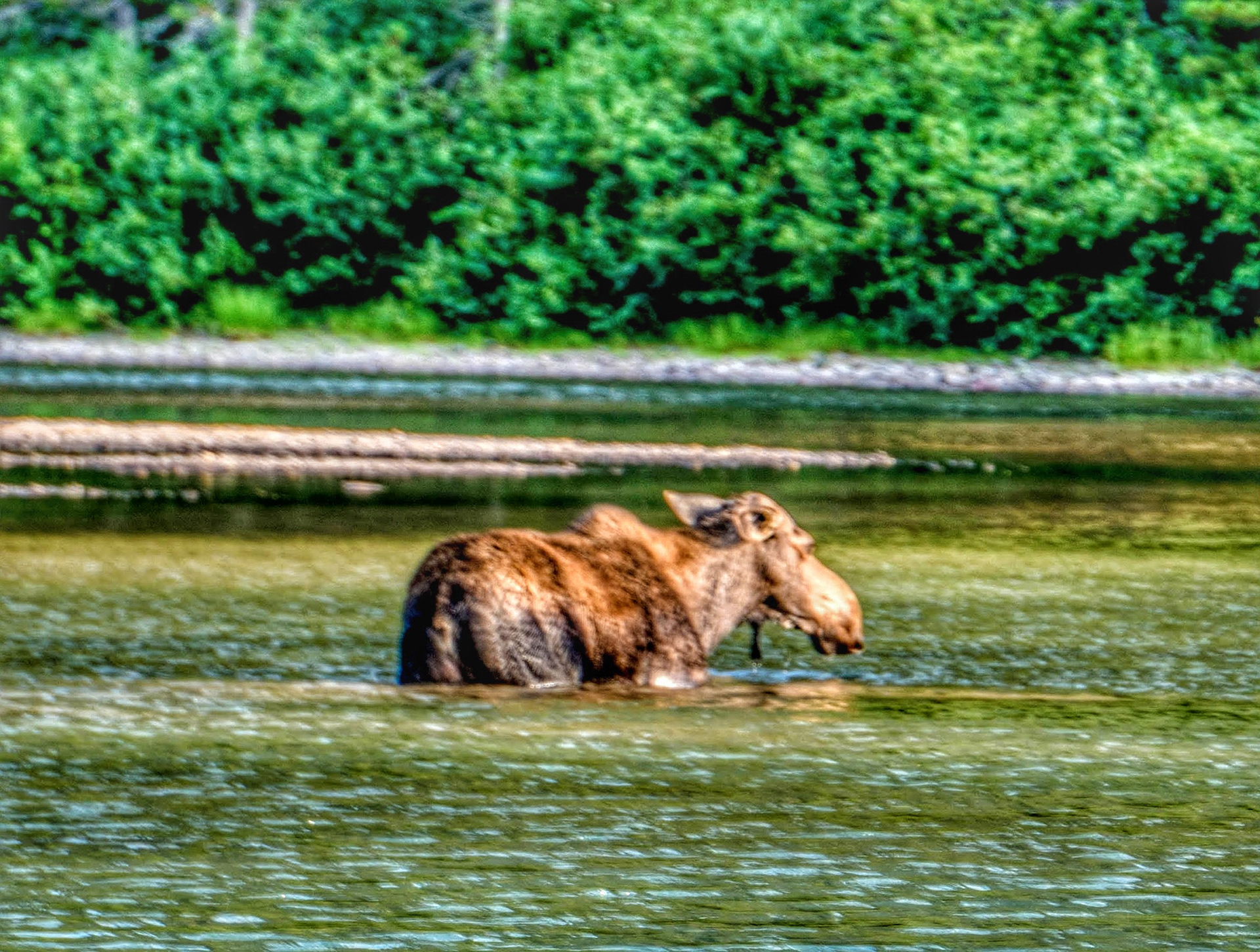 While hiking, I think about how Glacier is one of three National Parks in the continental US with grizzly bears (the true king of the north). Coming into the trip I had so many people ask if I was afraid of running into one, which is obviously valid and, while I was nervous about the thought of coming face-to-face with a griz, I think I was more excited about the thought of seeing one. It’s the APEX of N. America and the animal that I really want to see more than anything.
I’m now about another mile from the moose, and am hiking on a more dense part of the trail with limited visibility. After a few hundred yards, it opens up so I stop to take-in the unbelievable views. Suddenly, I see something move out of the corner of my eye. It’s about fifty yards away but I can’t make out what it is, as its head is down searching for food in the deep grass. Not ten seconds after I initially spot it, the animal finally goes to the shorter grass and lifts up its head. Grizzly!
I try to keep my cool as I whip out my camera and photograph this magnificent animal. I proceed to take about twenty pictures, and would have kept going, but it quickly vanishes in the opposite direction (which I suppose is the best possible route I could've asked for). 'Did that just happen!?' I think to myself as I excitedly clip my camera back onto my backpack.
FUN FACT: Grizzlies weigh between 300-850lbs but can get up to 1,400lbs. On top of being magnificent swimmers, they can run up to 30 miles per hour. Usain Bolt, the fastest person in the history of the world, was clocked at 27.8 mph (current human foot speed record). So, if you ever encounter an angry grizzly, do the opposite of what your instinct tells you and hold your ground. Not a race you’re going to win.
K that was a lot to handle in such a short time during my first hike of the trip, but I still haven’t reached what I set out for in the first place. I know I’m getting closer as I can hear the roaring water of the falls and when I turn the corner, the forest opens up again and I immediately know that I’ve reached my destination.

Redrock Falls is made up of cascades (a series of smaller waterfalls that come together) and is truly a sight to behold. It’s at least fifty feet wide and has plenty of places to climb, so I venture off the trail and start to make my way to the top in order to get a good vantage point. I find a flat(ish) part of the steep rock where I decided to sit down, relax and take-in the view. I pull out an apple, cheese and something that I consider a day-hike necessity… trail beer.
After I finish my snack, I take out my camera and attempt to get fancy with it by trying to make the water look silky. I learn that holding a beer and shooting with a quarter-second shutter speed is not so easy. After about ten tries, I finally get the shot, which triggers me to take a long (and very satisfying) swig of my beer. Just then, I notice two high school-age kids and their parents looking up at me, who were standing there for God knows how long. I raise my can and nod as a salute which causes the brother and sister to smile. The Mom tapped their shoulder and immediately got them back to the trail. 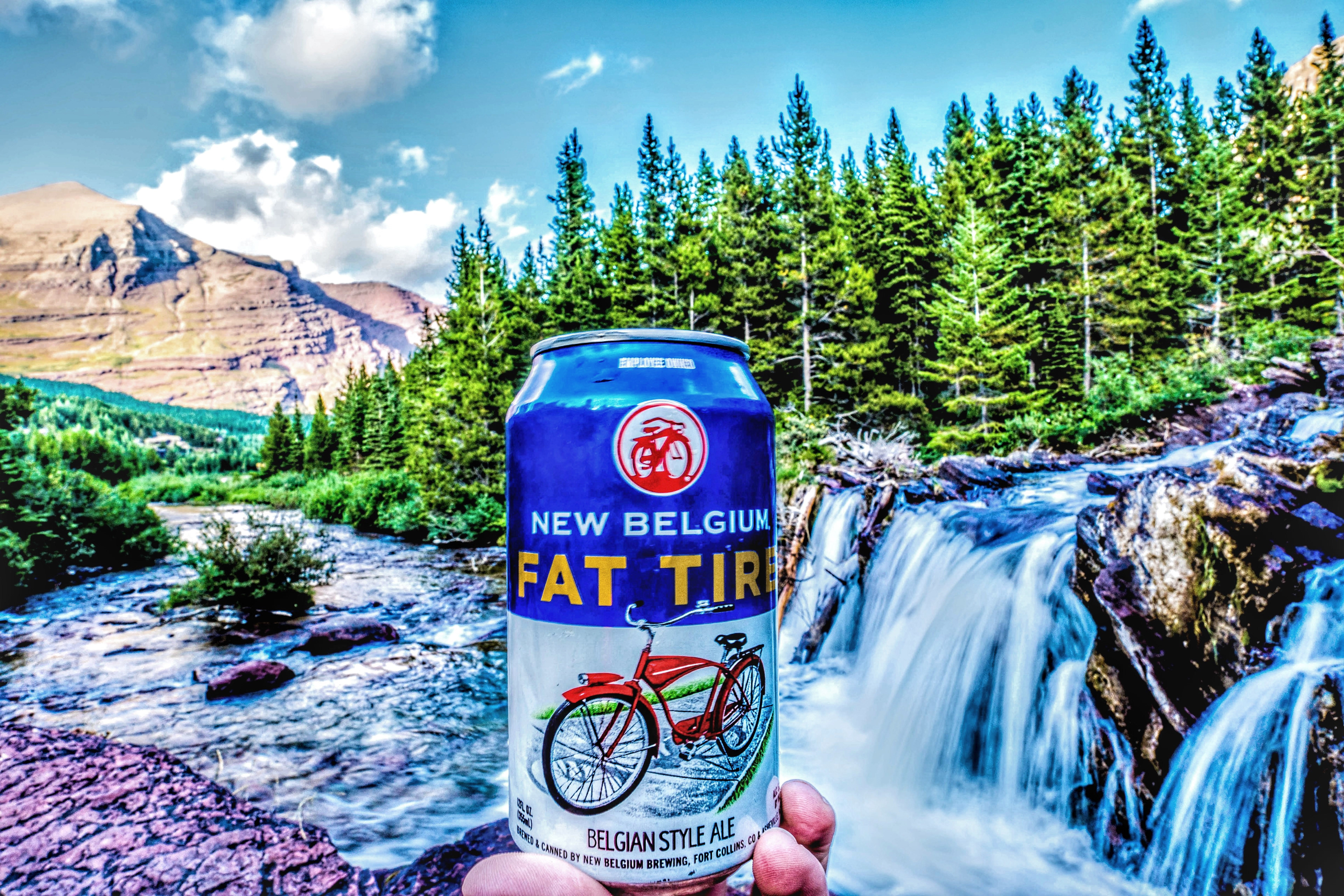 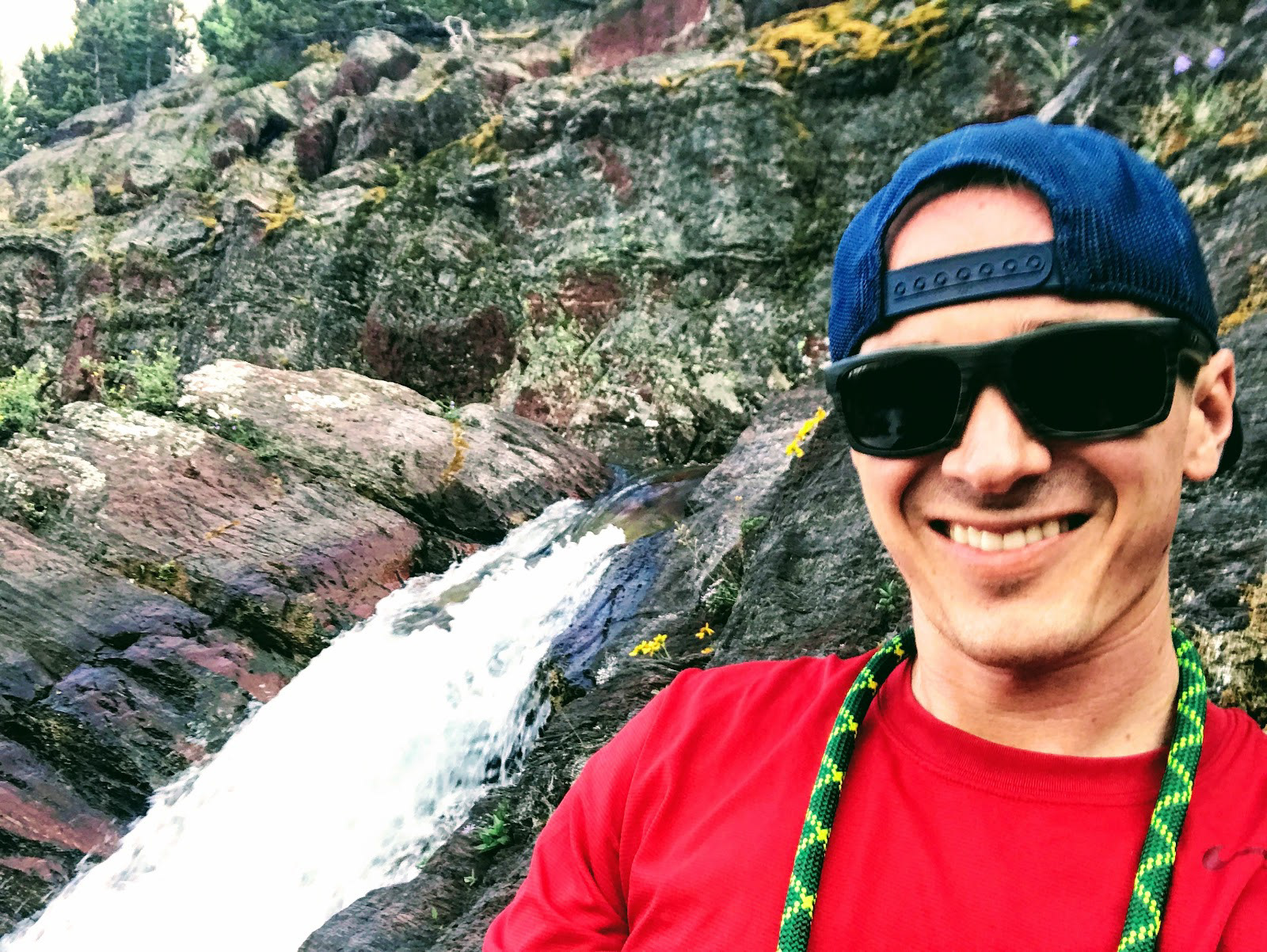 As I sit facing the falls overlooking the colossal jagged peaks, I have a strong feeling of accomplishment come over me. Miles from cell service and surrounded by the beauty which drew me to Glacier in the first place,  I finally have time to take a deep breath and soak it all in. I start reflecting on my day and since I’m in no rush, I get out my journal and start to write about what I experienced. In the last twelve hours or so: I woke up at a stranger's house in Billings, watched a real Native American Powwow at their reservation, saw three moose bathing in a massive glacier-carved lake, came within fifty yards of a grizzly bear and now am sitting atop one of the coolest-looking waterfalls I’ve seen in my life. I can’t help but shake my head and smile, as I know that this adventure is just getting started.

After relaxing for another ten minutes or so, I remember that I still don’t know where I’m sleeping tonight, so with a few miles of hiking left and limited daylight, I pack up and start to make my way back to the trailhead. Before finishing the hike, I veer off on the side path down to the base of the lake, where I saw the moose just a few hours earlier. The sky is starting to change color and I can’t help but to stand in awe for a few minutes, before finishing up this incredible trail.

I make it back to my car and start driving toward the St. Mary entrance of the park, which is about an hour south and where I need to pick up my backcountry permit in the morning. With no sleeping arrangements in place, I decide to find a secluded side road where I can park and sleep in my car. Not too far past the entrance, I start to make my way up a small hill, which is when I notice I passed a gravel road that looks like it leads to nowhere important. Perfect.
With no one behind me, I proceed to do a big U-turn to check it out. After driving about a mile down a narrow and very bumpy road, I come to a dead end. Surrounded by trees on both sides and knowing that this isn’t a place people would be passing by, I decide this is the perfect spot to set up camp.

Considering it’s already dark and I don’t feel like cooking, I eat some goldfish and another piece of the strawberry rhubarb pie, then wash it down with a cold beer (well balanced meal, I know). I’m not ready to call it a night just yet, so I get out my camping chair  and relax under a blood-orange moon, thinking about how my plan is all coming together. Tomorrow - I head into the backcountry.