Today is Tuesday August, 8th, and it’s my Birthday. I am now at the milestone age of 27 and am starting it off with a bang by waking up in the parking lot of what I now realize is the Canadian visitor center to Glacier National Park. I step out of my car and the first thing I notice is my foot. It’s still getting worse and it is killing me at this point. The swelling and bruising have become more visible, but thankfully I don’t have to put a lot of mileage on my feet today as I need to recover before I head into the backcountry of Yellowstone. I sync up my GPS watch with the app and see that I have hiked a total of 34.75 miles during the two days prior. Thank God for recovery day, I thought as I pack up my things.
Recovery day for me just means getting off my feet, but I’m not good at the whole relaxing thing so today I’m going to run an inflatable Kayak down the Middle Fork River, which makes up the western border of Glacier National Park. I have always loved whitewater and have rafted some pretty badass rivers, including a memorable trip to the ‘New’ in West Virginia. I’m set to push off at 10:00am, so with a couple hours to kill and considering it’s my Birthday, I figure I should eat a big hearty breakfast, rather than a protein bar like the three days prior. I find a local diner in West Glacier and proceed to order a feast that includes eggs, hash browns, bacon and a giant blueberry pancake. Feeling re-energized after housing that and about six cups of coffee, I am ready to get on the water.

I’m renting my kayak from a small rafting company in the area called Wild River Adventures and will be tagging along with some guides who are taking a couple groups rafting down the same stretch of river I am. A couple weeks prior to today, I got in contact with the owner of Wild River, Lexi, and we spoke about me getting some drone footage, which I would give to them to promote their company. The river is a grey area for drone use since the east bank of the river is technically part of the park and flying drones anywhere in NPS land is a BIG no-no. After talking on the phone for a bit, we agree to make a game time decision before I set off.
“Is Lexi here this morning?” I ask when I check in at the front desk. A cute, slender, blonde woman in her mid-thirties walks out of the office right around the corner and says, “I’m Lexi, how can I help you?”. “We spoke a couple weeks ago about me flying my drone during our trip, so I wanted to see if you’re cool with it.” “Oh yes! Alex, thanks for coming!”, she responds as we walk outside to chat further. I can tell that she is still on the fence about it and after talking for a few minutes, we both reluctantly agree that it’s best not to use it. As much as she would have loved the footage to use for enticing tourists to their outfitter, she couldn’t risk putting themselves in a position of getting a huge fine (or worse) from the National Park Service. Completely understandable, GoPro it is!
We board the school bus and set out for the river. “You’re the drone guy, aren’t you?” asks one of the guides as we go down the bumpy gravel road. “We were all stoked to have you get some footage, bummer that Lex reneged on that”, said another guide sitting in the row in front of me. We start talking on the way to the river and I learn that all four are (self titled), ski bums at Big Sky by winter and river rats in West Glacier by summer. Super cool people, who love life and are all about spreading the good vibes.
We finally make it to the launch point and I hop in the ducky then push off into the water. I wasn’t sure what to expect as I’d never taken an inflatable kayak in whitewater before, but the river is pretty tame so I’m not too worried about it. Within fifteen minutes of starting, we pass a tree with a giant bald eagle perched atop staring down at us. Aside from a grizzly bear, the wildlife that I most wanted to see was a bald eagle, and we ended up seeing five during the two and one-half hour trip. There are not many more animals who have the same majestic aura about them as a bald eagle does, so I was pretty pumped to see them in all their glory while taking in the amazing wilderness around me.

The rapids were mostly class II-IV and nothing too crazy, but it made me want to get into whitewater kayaking as I really enjoyed the control that it offers over a raft. 'Great, yet another hobby to add to my already aggressively long list,' I thought to myself as I get back in the bus to head back.
While on the bus, I strike up a conversation with a guide, Kelsi, who is sitting in front of me. “I’m staying in Missoula tonight, any suggestions of places to go… involving beer?”, I ask. “Hell yeah, I went to the University of Montana, so I got you. Big Sky is obviously a good one and they do free tastings which is dope, but KettleHouse is my favorite brewery and it’s downtown, so you need to check that one out.” says the once Missoula resident. “Say no more, I’ll be sure to hit both!” I respond with my mouth already watering from the thought of all the local beer I’m going to be consuming. 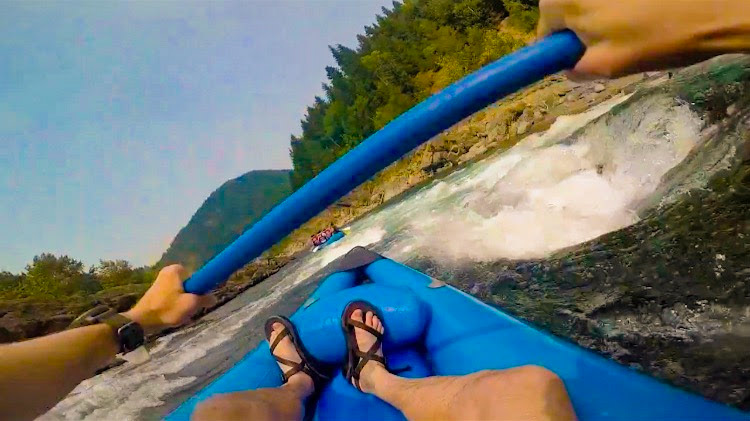 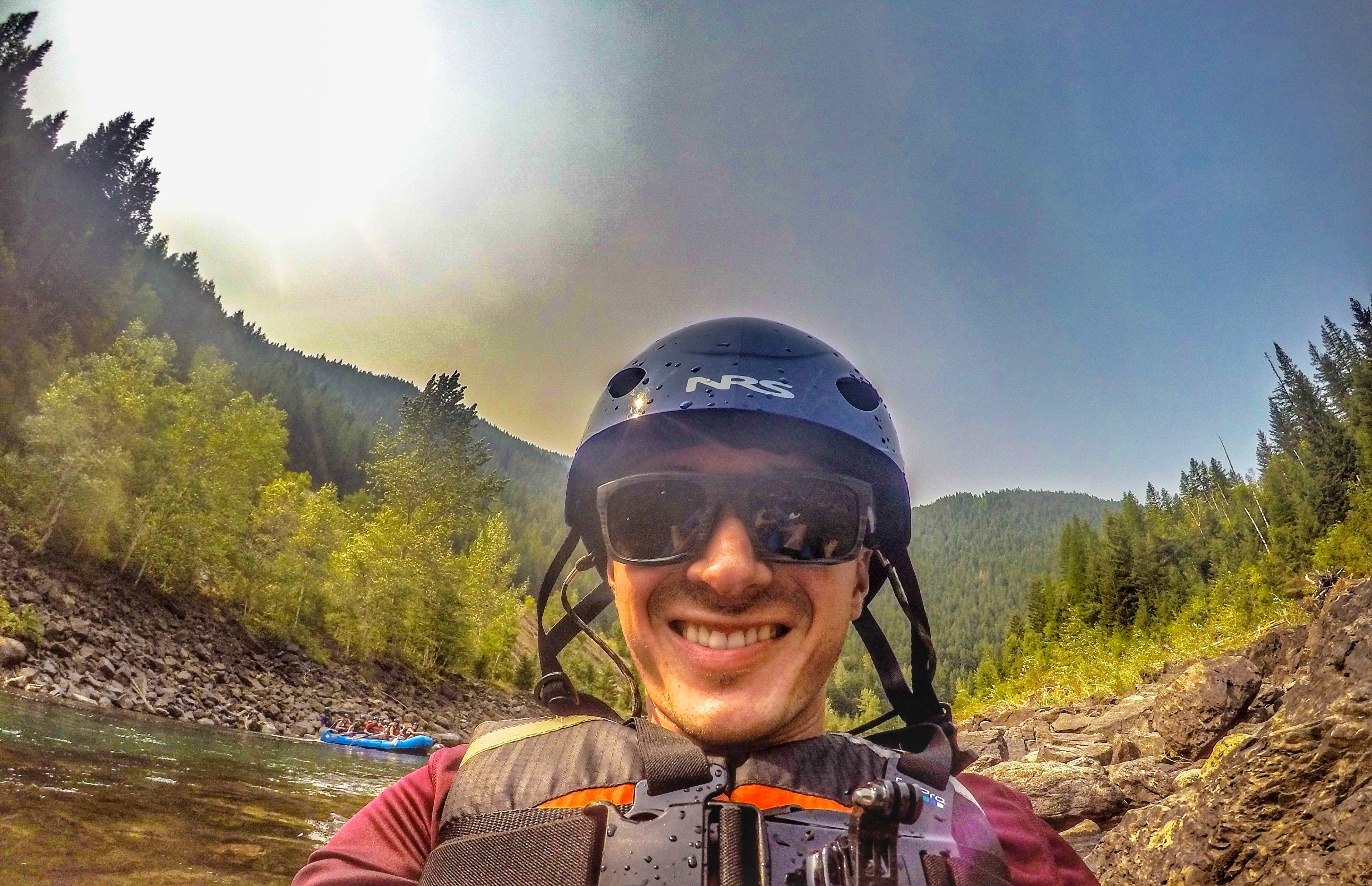 I get back in my car and start the, comparatively speaking, short drive down to Missoula. I thought it would be a good time to listen to my audio book of the famous, ‘On the Road’, by Jack Kerouac. As I open up my audible app and see “Now a Major Motion Picture”, I can’t help but recall a conversation that I’ve had many times with my brother about how much we hate books that have a movie cover. Not sure why it’s one of my pet peeves but I’m sure we’re not alone in our pure hatred for the publishing companies who taint classic covers with pictures of Kristen Stewart (OK maybe a bit of an overreaction, but just don’t).

After sleeping on the ground or in my Jeep the last three nights I decide that I would ball out for my birthday and get a hotel room… at the Econo Lodge. Still in pain from the ambitious mileage I went in Glacier, I limp into the lobby and am greeted by a wirey, awkward looking high school age kid. “Thanks for choosing the Econo Lodge Missoula! Checking in?” said the overly-excited host. “Yep, one bedroom for Anderson” I respond. “OK Mr. Anderson, pool is straight ahead, there’s a fantastic continental breakfast from 6-10am and checkout is at 11:00. How many keys can I get you?”. “One key is fine, thanks”, I reply. “Traveling alone I see. What brings you to Missoula?”. “Yep, I’m just passing through. Was backpacking in Glacier and heading down to Yellowstone tomorrow” I reply in a less enthusiastic tone. “Isn’t that like… lonely? Doesn’t sound like much fun if you’re all by yourself.” replies the acne faced high schooler who I’m starting to get annoyed with. “Nope not lonely, that’s kinda the point of the trip and what” I say before stopping myself as I don’t have the energy to justify what was a valid question by the only curious kid. I grab my key, thank him for the help, and head up to my room.
I get some much needed R&R then call my Mom and Dad, who I know are eagerly waiting to hear about the first leg of my journey. I could tell that my Mom was a bit nervous before I left, but my Dad was super pumped as I think it helped him reminisce on his ‘glory days’ when he tackled the backcountry solo. This is probably the last word he would use to describe himself, but he’s kind of a badass. Back in the 70’s he once broke the record for the fastest ascent and descent of Mt. Whitney, which is the highest peak in the continental United States. He was a competitive marathon runner and eagle scout, which certainly helps.
Pictured is my pops standing at the summit of Mt. Whitney (14,500 ft) circa 1977. His hands got so cold that he busted out his extra socks and wore them as gloves. Mustache game is on point though!