Chapter 1: On the Road
- X
"Well shit, this came up fast," I thought, when I awoke on the morning of August 4th, 2017. The car is packed, out-of-office is set, playlists and e-books are downloaded, and I’m finally ready to hit the road. My first stop is Billings, Montana, which is about 7 ½ hours from my home in Denver. I’m a sales guy and have spent a lot of hours in my car, so long stretches of driving really don’t bother me. I’m just ready to ride the wave of excitement for what’s ahead.
Much of that excitement is stemming from just getting off the grid and recharging. Work has been beyond busy, the news somehow gets more depressing every day and I’m spending far more time mindlessly scrolling social media than I care to admit. I’m what my friends call,  “a planner” so in the months prior to today, I spent a majority of the little free time that I had researching routes, topo maps, and all of the ‘must-stop’ sights. I’m about to solo backpack in the wilderness of not one, but two of the most epic landscapes that our beautiful country has to offer: Glacier and Yellowstone National Park.
I have my backcountry trails and campsites all mapped out, with multiple backup plans in case those are full and even have my camera settings dialed in for some specific shots I want (yes, I am aware that I have OCD). I made a pack list and laid out all my gear last night to make sure I don’t forget anything, which mainly just made me realize how much time and money I’ve spent at REI. Such a dangerous place. 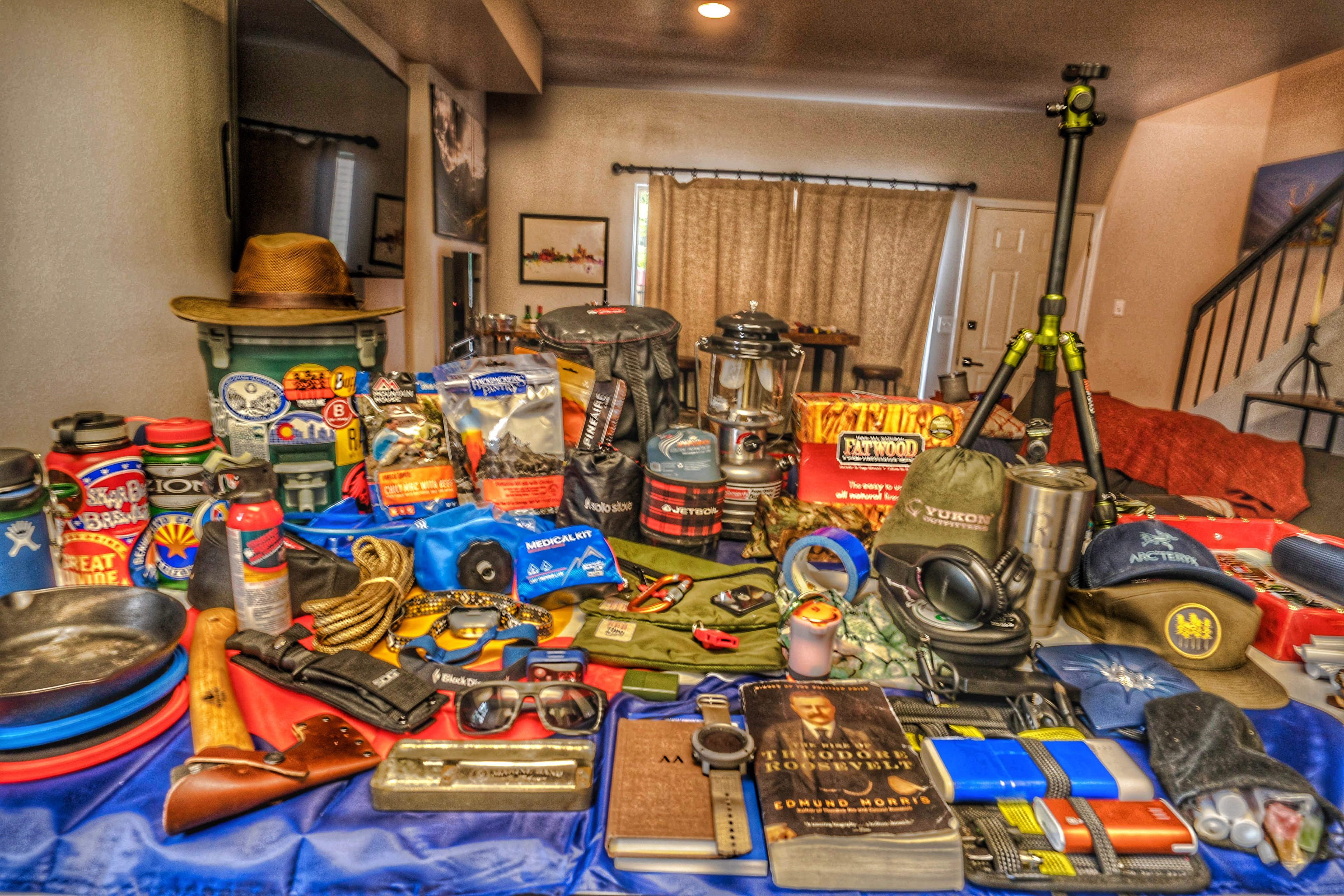 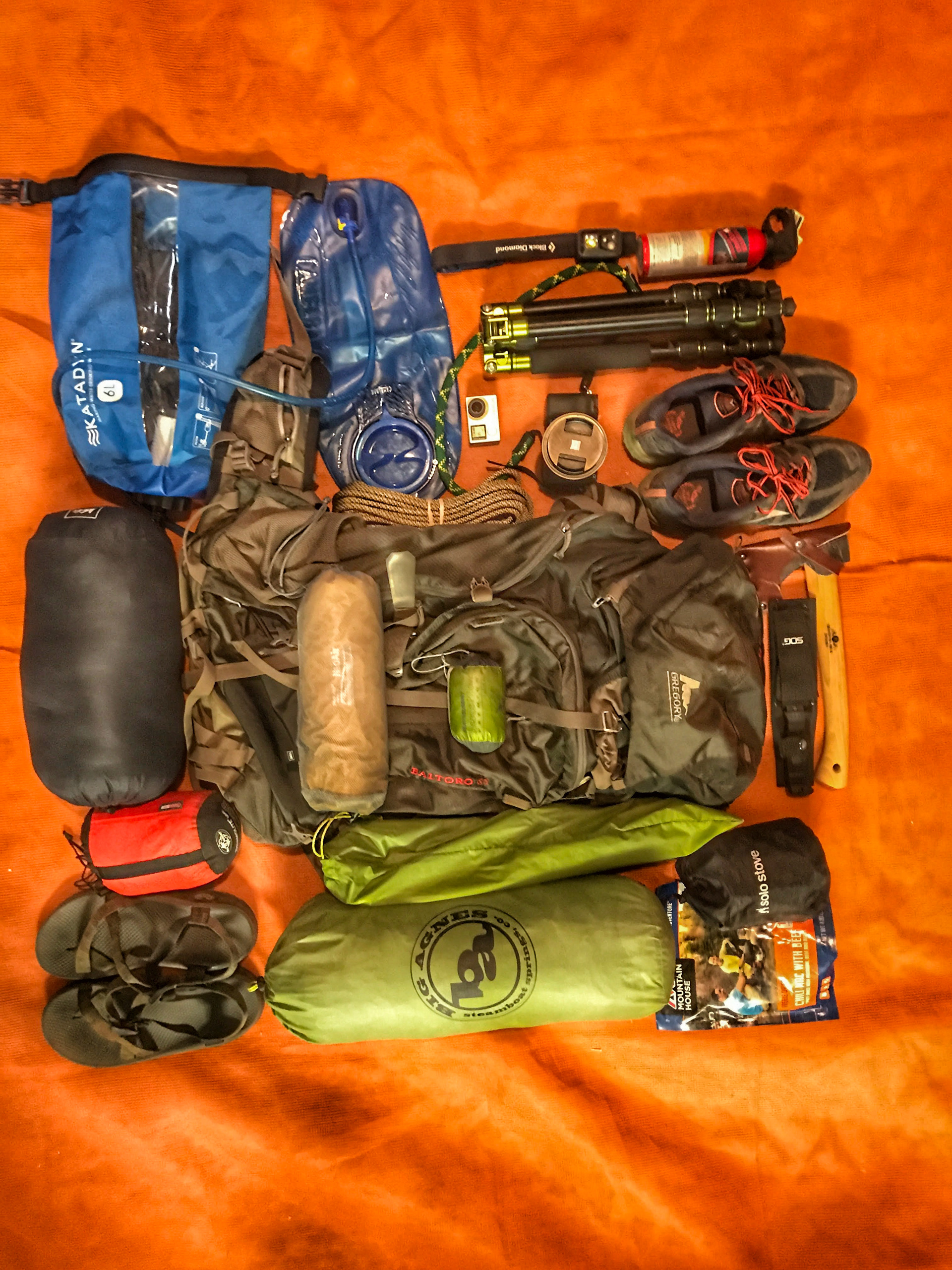 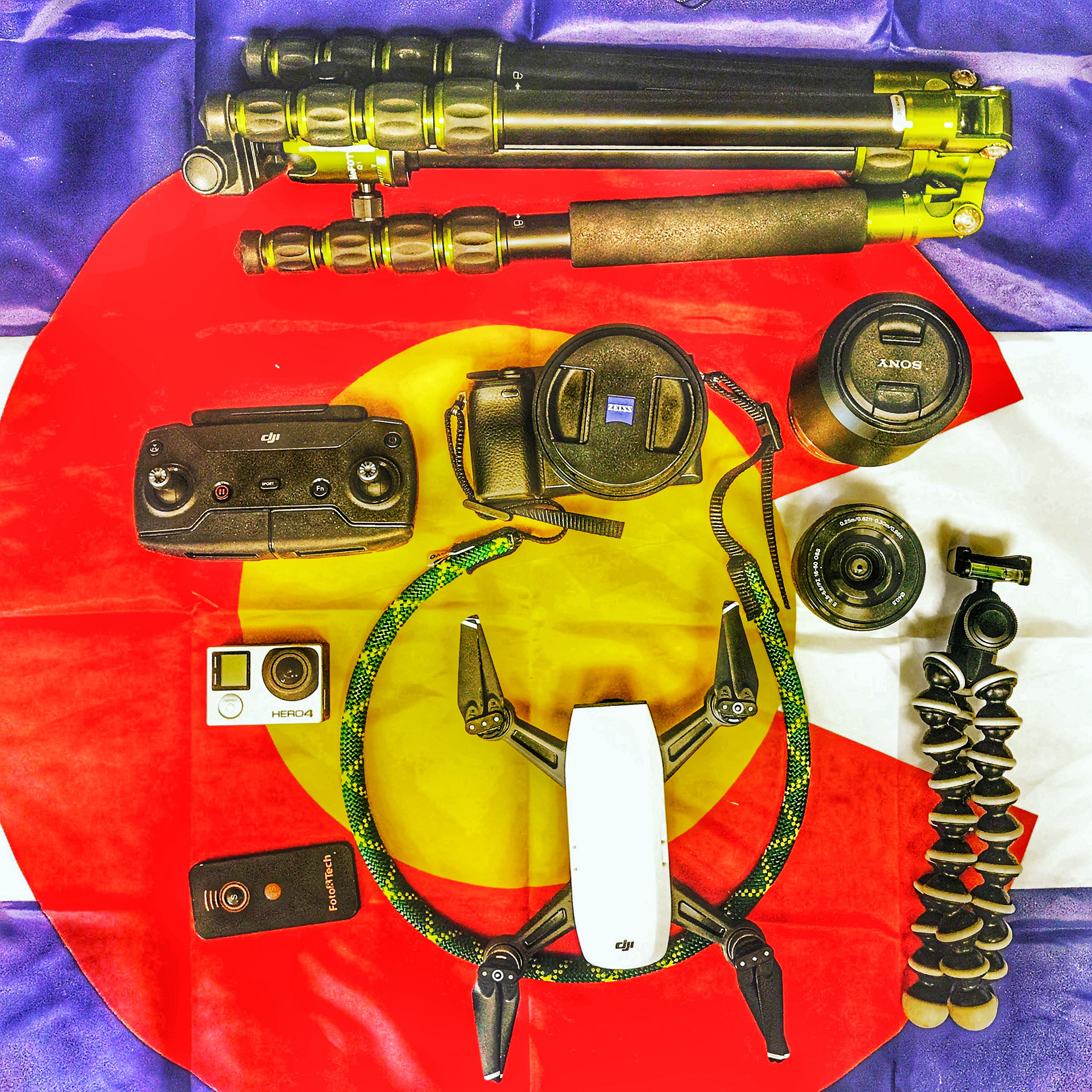 Hells Angels
I’m en route to Billings, about fifty miles north of Casper (middle of nowhere), when I notice the “low fuel” light has come on, so I pull off to get gas and stretch my legs. As I’m filling my tank, I’m overcome by the loud and thunderous roar of engines. The noise is coming from behind me and is progressively getting louder.  I can actually feel the vibrations going through my core. I immediately do a 180 to see what the quickly-approaching noise is and realize it’s a huge biker gang all driving black Harley’s. Whoever they are, they want to let everyone know they’re coming.
The bikers pull in and fifteen to twenty of the baddest looking dudes I’ve ever seen in my life are now on all sides of me. Tatted-up head to toe, with guns and knives strapped to both sides of their belt, all wearing blue vests with “Hell’s Angels” and their respective states stitched on the back.
Part of me is extremely intrigued as I’ve read quite a bit into the gang, including Hunter S. Thompson’s 1967 book, “Hell’s Angels: A Strange and Terrible Saga”, which vividly depicts his crazy experiences from when he spent two years living and traveling with the gang. The other part of me is honestly a little scared, as I’m genuinely not sure what to do, even though I know we’re all just stopping to get gas. It’s a strange feeling. One thing I do know is I don’t want to stick around, but after four and a half hours of driving, my bladder feels like it’s about to explode, so I lock my car four times and go inside. I walk right past a group of them shooting the shit and I’m trying my absolute hardest not to not stare or make eye contact which I learn is easier said than done after seeing “1%” and “666” patches everywhere.
I come out of the bathroom and no one is in the gas station except one of the members getting a pack of smokes. Although terrified, I want to document the moment somehow, so I whip out my phone, do another full scan to make sure no one’s around, then snap a picture. My stomach dropped right when I did it as I felt like someone was watching me, and my trip might end before it even starts. Thankfully there wasn’t, so I got the hell out of there and pressed on to Billings.

FUN FACT: The Hell’s Angels have a charitable side and are known to hold fundraisers to help those in need. One account I read was that a group of them stood in line at Walmart for four days before Black Friday, then proceeded to buy their entire stock of bicycles, which they donated to a homeless shelter in Fresno.

One objective of this solo trip is to get out of my comfort zone and experience some new things, so I decided to try “couch-surfing” for the first time. Couch surfing is a community of travelers who open up their home to others who are passing through, without asking for anything in return. It’s something I’ve heard of and always thought would be a cool way to meet interesting people while saving some money, but I never really looked into it as an option when traveling. 'I really hope I don’t get kidnapped tonight', I half-jokingly think as I drove through downtown with only a few miles left.
After almost eight hours on the road, I arrive in the early evening, where I’m greeted by my hosts, Neil and Emily, who are Billings residents and world travelers themselves. “Welcome to Montana!,” Neil says with a kind smile as I get out of my car. “Guest room is to the right, there are road maps and Montana travel guides on the nightstand if you want em’ and feel free to grab some apples on your way out in the morning - just picked them from the tree out back.”  He invites me to join him and Emily on a walk with their dog at a nearby park, but with it being Friday night in a city I’ve never been to, I decide to hit the town and take in the local surroundings.
I pull out my phone and Google events going on in downtown Billings and see the Magic City Blues Festival, which is right up my alley. 'Clearly checking that out', I thought as I make my way toward downtown. It’s a beautiful evening, so I spend the next few hours walking around to various spots and listening to some awesome music (with beer in hand, of course). I see that a funk band from Reno, called Jelly Bread, is playing an after party show at a bar close by, so I decide to go; I'm sure glad I did. I was planning on only staying for a few songs so I could get a good night’s sleep before the camping begins, but they are absolutely crushing it and has me grooving to their soulful tunes past midnight. Great way to kickoff the trip.

I wake up early on Saturday, August 5th, and am ready to hit the road for my first planned stop of the trip: the reservation of the Chippewa Cree tribe in Rocky Boy, Montana. In the early stages of planning my trip, I decided that I wanted to look into doing something at one of the Indian Reservations, as they have such an important place in the history of Montana and of course, American history. I stumbled upon the website for the tribe which promoted the powwow as their biggest event of the year and it wasn’t too far out of the way, so I added it to my agenda. I have NO idea what to expect at this point and thinking I’ll make just a quick stop and leave if (when) it gets awkward, but I’m excited to check it out nonetheless.
As I’m brushing my teeth and looking in the mirror, I can’t help but recall a conversation I had with my friends Julia and Drew at dinner two days ago. “Are you going to shave while you’re gone?” Drew asked, while knowing full-well that I’m always clean shaven due to the fact that I can’t grow a beard. “It’ll be tough but I’ll try to go the full 8 days without shaving. I think it would be the longest I’ve ever gone. Should get weird.” I reply fully ready to take on the challenge of seeing how creepy my beard and mustache can get. “Gross. You need to send pics!” says Julia as we all have a laugh at my expense.
After a quick stop at the grocery store, I am now ready to head north for the powwow. Rocky Boy Indian Reservation is the smallest of the tribes in Montana and is located in the North Central part of the state. It’s about seventy-five miles from the Canadian border and over 100 miles from the closest urban city center (Great Falls), so I’m not expecting a whole lot of tourists.  It’s a hazy day and the entire sky looks as if it’s one big white cloud, which I think provides a cool backdrop. As I pull into the “town” within the reservation, I’m immediately hit with the reality of the hard times these people are going through. It’s a consistent feeling I get whenever I’m passing through an Indian reservation, which also serves as a sad reminder of all the mistreatment that has occurred and is still occurring to the people whose ancestors once roamed these lands far before the United States was settled.
Ensuing the drive past their town which was primarily made up of boarded-up trailers and stray dogs running around everywhere, I start going through an area which gives me a feeling that I can’t recall ever experiencing from landscape. Located at the base of the Bear Paw Mountains, the land that the reservation sits on is uniquely beautiful in it’s own way. I’m finding it hard to put my finger on it, but driving on the winding roads around streams and big rolling hills, I feel like I’m taken back to a time hundreds of years ago and I can truly imagine the tribe living off the land for generations, just as it is now.
While I'm taking-in the amazing views of the land that they call home, it hits me that I have yet to see another person and it seems eerily quiet. With the powwow being their largest event of the year, I just assumed there would be signs or some indication of where the event would be, but I haven’t seen a single thing eluding to any kind of event. I’ve been the only person on the road for at least fifteen miles and I get to the point where I legitimately no longer think a powwow or an event of any kind is going on, so I pull off to the side to check the website again. 'No service - awesome'.
Almost ready to give up and just move on to Glacier, I turn onto a random gravel road that goes up a steep hill, which I figure would give me a good vantage point. At the top, there are three horses roaming their land eating the dry grass, so I stop to snap a quick picture. Even they are looking at me like I don’t belong; I think to myself as I begin to scan the area in every direction. Off in the distance, about five miles northwest of where I am, I spot several tents and tall floodlights. 'If that’s not it, I’m giving up,' I thought with little  confidence that I will get to see the powwow I set out for.